Just hours after releasing their pre-release single and first title track “Party,” Girls’ Generation has achieved their very first all-kill for the song!

According to iChart on July 8th at 1:30am KST, the song was seen in #1 on various real-time charts including MelOn, Mnet Music, Bugs, Olleh Music, Soribada, Genie, Naver Music, and Monkey3.

Girls’ Generation is set to release two additional title tracks, “Lion Heart” and “You Think,” though the release dates and its music videos have not yet been revealed. 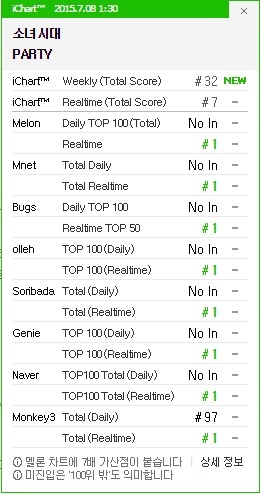