Impressed by Hani’s show of intellect on her appearance in JTBC‘s I Go to School, fans looked back and discovered that her IQ was revealed to be 145 on a past episode of Weekly Idol.
Hani’s intellect became a hot topic recently when the singer joined MIB‘s Kangnam, AOA‘s Jimin, and more on a recent episode of  JTBC’s I Go to School. In the episode, Hani showed off her quick wit and vast knowledge by solving a calculus problem and excelling in English as well as Chinese.

Curious as to how smart Hani actually was, fans took it on themselves and found a previously aired episode of “Weekly Idol” featuring EXID, in which Hani’s intelligence was discussed.

To the surprise of fans, the EXID member’s IQ was revealed to be 145, an incredibly impressive number. The show also revealed that the singer had scored a 900 out of a maximum 990 possible on the TOEIC English proficiency test. 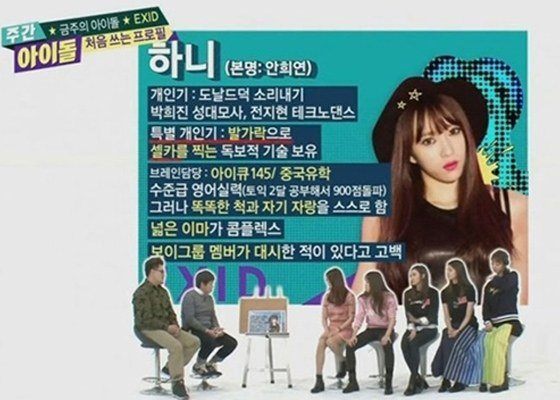 BTS’s V And BLACKPINK’s Lisa Both Pose For Pictures With Elvis, The Luckiest Fan